Nimrod Goren is soft-spoken, friendly and modest; he does not initially appear to be as intimidating as his namesake of Genesis 10:9. He is, however, as one discovers upon researching him, a total hotshot. On Monday I was lucky to have the chance to meet with him – he came in from Tel Aviv where he was speaking with people about setting up his new think tank, Mitvim (Hebrew for “sketches” or “blueprints”.) Nimrod describes its goals thus: “Mitvim – The Israeli Institute for Regional Foreign Policies is an independent think tank that envisions a fresh start for Israel among the nations. It aims to reshape Israel’s relations in the Middle East, Europe and the Mediterranean, by promoting new paradigms for Israel’s foreign policies, enhancing Israel’s regional belonging, and advancing Israeli-Arab peace.” 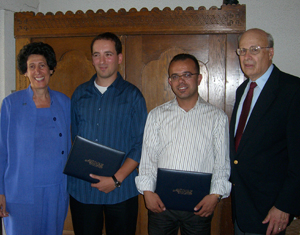 Nimrod writes and teaches about Israeli foreign policy, and is particularly expert in the role of Turkey in the Middle East. We had a wonderful conversation about the current Israeli political climate. He noted that many “people to people” projects collapsed in the second intifada, and that actually this was not all bad – a kind of “survival of the fittest.” I asked him what was it specifically about the second intifada that killed off some of these projects. He noted the physical impact of the separation fence/wall. (When I mentioned this to Zvi, he added that it is hard to sustain momentum when your group seems so irrelevant). His wife works for one of the projects that does continue, a bilingual school, and I will be interested in speaking with her. She was just one of the many helpful contacts he suggested.

While I only initially heard of Nimrod through a family contact, it turns out that he is also a Fulbright alumnus! On top of excellent advice on the academic side, then, he had helpful thoughts on arriving in a foreign country with only some idea of the project one wanted to undertake.