Today I met again with my advisor, Zvi Bekerman, mostly around university logistics. We went to meet with a university administrator about how I can get a university ID card, access to the library and the computer system, how I can audit a course and (least importantly for my project but something that would be nice for the whole family) access to the gym. The news was good overall – it can be done. It would be easier if I had “a letter of invitation from the university.” I found this a bit confusing since I thought for the purposes of these documents the administrator with whom I was talking was the university. Zvi helped, explaining that if Fulbright could talk to folks in the Hebrew U administration with whom they had prior contacts, they might produce such a letter of invitation. So I have asked the already very helpful Fulbright folks for yet more help. 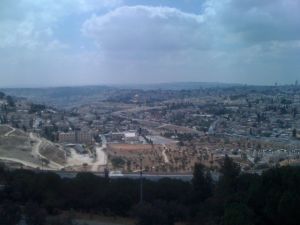 All conquered territory...many times over

There was a funny moment as Zvi and I were beginning to talk. I had not noticed on my last trip that many offices in the building (and due to careful architecture, many rooms of the university as a whole) have an unbelievable view over the Dome of the Rock and the Old City. I commented on the view, and Zvi said with a wry smile, “Never forget it is all conquered territory.” Hmm…is he thinking of 1967? 1948? Or further back, to Crusaders, Arab conquerors in the 7th century, Byzantines, Romans, Greeks, Persians? Perhaps the reference was to the Babylonian conquest of Jerusalem in the 6th Century BCE? The first conquest I can think of is the Israelite conquest of Jebusite Jerusalem under David. It certainly is all conquered territory.