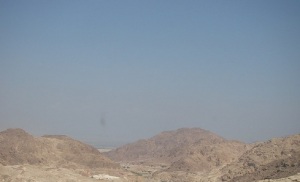 The land through which whats-his-name led the Israelites to the Promised Land.

Why is there no study of comparative religions in the Israeli schools? Rabbi Marc Rosenstein posits a reason. “Given the history of Christian missionizing, many parents are nervous about anything that would involve the New Testament in the schools. As for Islam and the Qur’an, it is different, since there is not that same history. It is perhaps just more of a sense of ‘why do we need to know that? We have our world, and they have theirs.’” Rabbi Rosenstein described this position with a significant amount of fervor, which surprised me since he has been involved in interfaith dialogue for many years as the director of the Galilee Foundation for Value Education. We met at his office at Hebrew Union College – Jewish Institute of Religion in Jerusalem, where he is the director of the Israel Rabbinic Program. I asked him if he thought teaching comparative religions could in fact lead to reducing the conflict. He was not dismissive, but he was skeptical. “I’m not sure the conflict is about religion. It is an ethnic and national conflict. Once when I was visiting an Arab neighbor I asked her about her religion. She had an interesting reply: it is not relevant. She was saying that the important thing was that she was Arab, and if I heard she was Christian I might assume she was more westernized, more open.” Still, he did note, “religion is used for ethnic and national purposes.”

If learning about the core tenets and texts of other religions might have limited effects, how about studying different historical narratives? “Well this is a very controversial idea. As you may know, there have been many proposals for parallel textbooks, etc. But when you say the word ‘narratives’ you already raise hackles, because narrative implies there are different truths, and that goes against the official position on both sides.”

If people are not learning about each others’ religions in the schools, are they learning about them in adult settings? Rabbi Rosenstein was evocative about the limits of dialogue even among religious leaders. He has heard them say, “It’s not that I don’t support what you are doing. It’s just that it will take two hours and I will not learn anything.” Why? “Well, if we begin ‘Say your name and one sentence about why you are here,’ two hours later we have heard many platitudinous speeches about peace and have had no discussion.’” Even if there is a discussion, he notes, sometimes it is hard for a reform rabbi coming from a tradition of textual criticism to find much in common with a village imam with little education. Still, he struck a note of hope when he mentioned that once he began a discussion by asking each person to give one example of a difficult question someone from the congregation asked. “Then we had real exchanges.”

I think about Rabbi Rosenstein’s questions, and then I read Akiva Eldar’s opinion piece today in Haaretz. Eldar notes that at the UN Prime Minister Benjamin Netanyahu spoke about the connection of the Jewish people to Israel but only talked of “the Palestinian population living within it.” He also noted that President Mahmoud Abbas spoke of “the prophets Jesus and Mohammad, but ‘forgot’ Moses.” Such omissions sound absurd to the ears of people who know the religious identities of the peoples involved. Today also Jewish settlers burned a mosque in the Galilee. If those involved had known a little bit more about the beliefs of their neighbors, might they have hesitated to take such an extreme action?