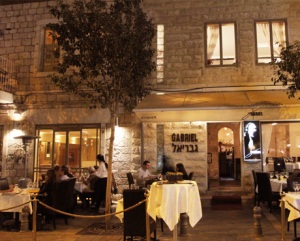 A step up from my usual felafel sandwich

“What have you seen of the gap between the Arab schools and the Jewish ones?” While it is not a question I can reply to more effectively than many excellent reports have done, I was greatly encouraged to have been asked it, due to the identity of the inquirer. I was having dinner with a longtime American supporter of Israel at a delicious kosher restaurant close by the top-notch West Jerusalem hotel where she was staying. Interested in the concerns of the Bedouin and the effects of the barrier on West Bank villages as well as in the gender and economic divisions within Israel, my hostess was extremely well-informed and incisive. A successful professional in the U.S., she brought her intellect, her emotional investment in the Jewish state, and her universal values to the discussion.

Would there be topics on which my interlocutor and I differed? I don’t doubt it. Is her voice currently the dominant one among supporters of Israel? It is not. Nonetheless, she represents the force most likely to make a real change in the conflict. Americans who are in favor of a vibrant, democratic, peaceful Israel are, I believe, the group positioned best to move us from the status quo to a more humane future.