The Empire is gone, but if you want a taste of a wealthy hill town from the Ottoman 19th century, go to Yoruk Koya. It was first settled in the 13th century by the Yoruk, nomadic peoples from Khorasan. They people from Yoruk Koya and the better known nearby Safranbolu made a lot of money as Janissaries – as soldiers and later as bakers – in the capital. A 1929 census showed that over half the bakers in Istanbul were from these towns 250 miles from Istanbul! They brought this wealth back with them, and built beautiful multi-story wood houses. Some of the names of the people still reflect their work in the military – one last name means “armorer” for example. 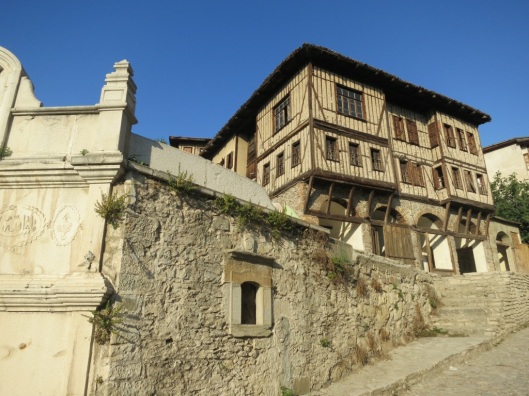 Interestingly, the Janissary Corps was not orthodox Sunni – instead it followed a set of customs called “Bektashi” after its Sufi founder Haci Bektash. “For those who have Awareness, a hint is quite enough. For the multitudes of heedless mere knowledge is useless.” Among their different traditions was a more equal relationship between men and women – in Yoruk Koya traditionally women could pass by the café without covering their faces, and men and women could drink alcohol together. (Orthodox believers sometimes exaggerated these difference to imply moral laxity.)

The area has seen layers of loss. The Bektashi were disbanded as a Sufi order along with the Janissaries in 1826, merging them with the more approved Mehlevi order. Then Ataturk made all sufi orders illegal when he sought to unify the country under a secular Turkish identity in the 1920s. Also in the 1920s Turkey and Greece agreed to a “population exchange,” and up to 20% of Greek-speaking Christians who lived in the area were moved to Greece. Still, in Yoruk Koya and Safranbolu one can see details that indicate the Bektashi heritage of their inhabitants. They followed a numerological system, and many wall paintings in the houses have the specific numbers worked into their decorations. I came across a Greek inscription from the 1840s. Some graves have carved on the top the headgear of the Sufi dervishes (leaders) buried there.

I also experienced a more immediately physical connection with the area’s history by spending part of an afternoon in the historic Cinci hamam. Built in the 17th century, the marble-slabbed sicaklik (hot room) is capped with a traditional dome with small glass windows. Metal wrought faucets spill into bowls stamped with the name of the hamam. A massage there was both invigorating and an aesthetic experience.

1 thought on “Visiting the Ottoman Empire”