Last night, after arrival into a mid-size airport that functioned fairly well and that kind of a drive through empty streets where you try to get a sense of the city in a jet lagged blur as it zooms by, we got to bed around 4am.

Tired at the Tashkent Airport

I hit the ground running at 7am with a visit to the City Palace Hotel’s exercise area. I came down from my 11th floor wood paneled room. They had a serviceable room with two treadmills, some weights and a stationary bicycle. The steam room was small and beautifully tiled, and I would have tried to capture some of the sense of a hamam except that it was the hottest steam bath I had ever been in! A quick stop in the sauna and some laps in the pool completed my gym journey. Breakfast in the surprisingly cheerful and reasonably sized coffee shop. Overall, I get the sense that someone with moderate aesthetics, taking a signal more from a nice Hilton than from the empty and grand monstrosities of the old Soviet empire, built this hotel.

Most of the streets are very modern. 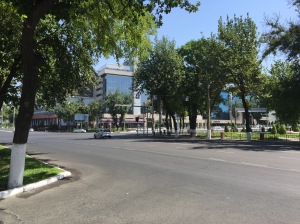 People that I see so far look generally white, along the same spectrum that white folks in the U.S. would look. They don’t appear central Asian – well some do a little bit – is this a city vs country thing? The good morning greeting is “Salaam aleikum.” Neither last night at the airport nor today at the hotel do I see anyone in any form of traditional dress. A quick walk next door to the Timur Museum did reveal two women in brightly colored hijab. The young men hanging around the lobby of our hotel are wearing football (soccer) polo shirts and either shorts or slacks.

2 thoughts on “Tashkent – More Soviet than Silk Road (so far)”