The Bardo museum is reputed to be one of the great museums of the world. Also, almost everyone I have met in Tunisia speaks basic French. Therefore, I was surprised when my taxi driver seemed confident of the idea of “Bardo” but not so much of the idea of “musée.” So I followed along on my GPS, and we did indeed go toward the Bardo until a certain point. When it became clear to me that he was not going to turn back toward the museum, I asked to be let out. He seemed happy, and it occurred to me that this was the neighborhood called Bardo. A short walk later, which took me past the Parliament adorned with orange trees and concertina wire, and I was at the museum.

My favorite pieces in the permanent exhibit were the marine life mosaics.

There was also a fascinating exhibit on the revolution of 2011, with many of the personal videos, emails, social media posts and other electronic records. 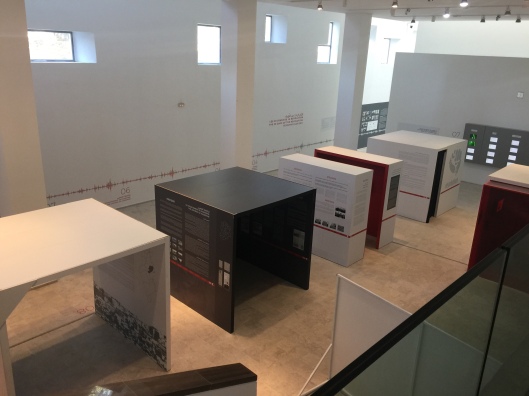 On the way to the shared taxi station, the metro was so jammed I couldn’t get on. I thought I might be there forever – but an empty one came right behind. Like much of the transport system in Tunisia, the metro isn’t fancy but it seems functional.

I found my shared taxi after asking every several blocks and then asking among the taxi drivers. Fortunately mine wasn’t the one with “Just God Be Help Me” written on it in English! 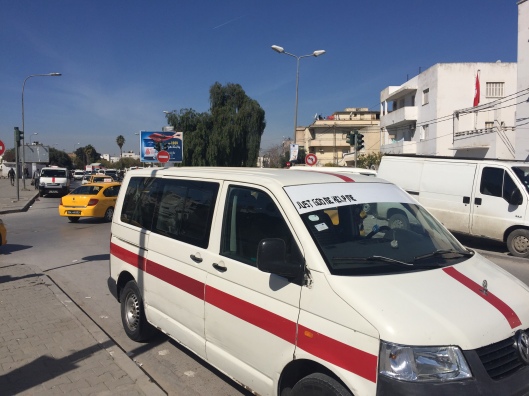 I wondered why my driver kept calling out something like “kreed” to get people to join our louage, when none of the towns I was told to ask for were called that. So I confirmed “Dougga” with him twice more. I think I solved the mystery later that day when my next taxi passed a town near El Kef called “Krieb”.

It took about 45 minutes for us to depart. Slight confusion when we got there – he was dropping me in the new town (“Dougga Nouvelle”) and I did not know where the taxis were for the archeological site (“Dougga ruine”). Fortunately before he left he connected me with one.

A word on costs. I’d seen 6 dinar quoted on the web from 2012. I don’t know if prices have risen or I was overcharged but I paid 9. Then as many have noted the short (but steeply uphill not worth walking) taxi to the site is 20 round trip,and you arrange time time your driver should return. I asked for two hours which worked well for me.

And up I went to the remarkable, World Heritage Site Roman ruins!