I arrived in Kairouan by bus about 6 pm. My host Chema had sent me pictures of the route from the secondary street down the alley to her door, but I also wanted to warn her I was coming so when I phoned she came out to get me. Her house is wonderful – it has been in her family for several generations and she restored it in the early 2000s. 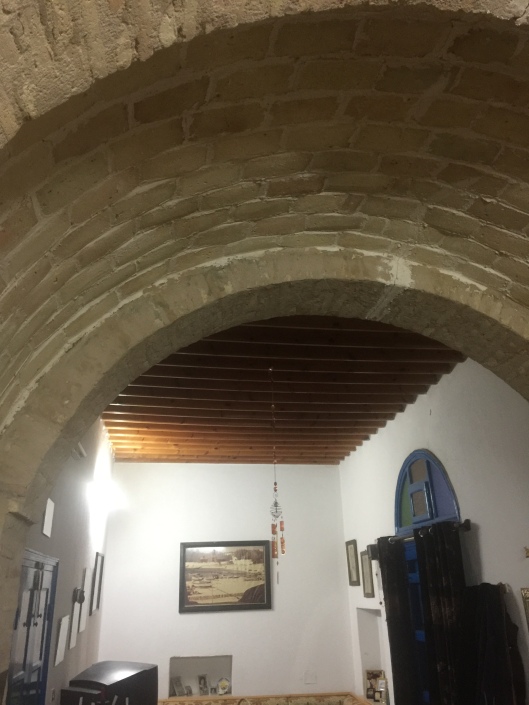 She lives part of the time in Kairouan and part in Hammamet, where her daughter lives and where she works in tourism. She lived in Germany for some years and works primarily in German, though her French is also better than mine and is the language in which we communicated. She is fiercely proud of Kairouan, and feels it is the real Tunisia. “In Hammamet I am in Europe; in Kairouan I am in Tunisia.”

That evening I went out for a walk and got my first view of one of the extremely numerous sacred sites. The mosque of the barber is the resting place of a companion out the Prophet who used to carry around three whiskers from the Prophet’s  beard. Next to this holy site is a key pilgrimage site for the children of the city, “kids town.“ It was happening, and looked like a lot of fun.

The next morning Chema made a delicious breakfast, including a hot cereal made with grains, and homemade jams. I also appreciated her various pointers on places to go. I began with a wander through the medina, which as I had read is gorgeous, lively, and very genuine. I ended up going down a small covered alley with shoe stores and cobbler’s shops that seemed to go on forever – so fun.

Alas, my first destination mosque was closed on Saturdays, but fortunately the enterprising gentleman outside guided me into the beautifully restored governor’s palace from the 18th century. The fact that it also serves now as a carpet shop I am sure was no part of his motivation for encouraging me to enter and tour. (Indeed, the one downside of the medina for me were the multiple men happy to “help“ me if that help might land them a rug sale.) I was sure to hit the holy site/engineering marvel of the Middle Ages that places a camel in an upstairs room turning a pump that pumps a well for the town!

More wandering, and more mosques, including the very old and large central mosque. 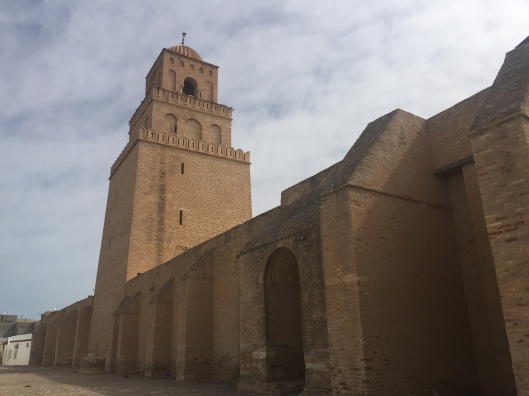 As my host had advised me, I stopped into the Hotel Kasbah. It is another beautiful restored palace. I inquired about lunch, decided to not pay 12 times what I would for a schwarma sandwich from a street vendor, and instead enjoyed a tea and WiFi by the pool.

Then the walk to the outskirts of town to see the large pools of the Aglahbides turned out not to be essential (they are not particularly beautiful basins), but it did perhaps help me, like the camel room, to understand how important hydraulic engineering was to this town back in the day. Returning to the Barber’s mosque was however very much worth it, with a series of beautiful rooms, the tomb of the prophet’s companion, and an elegantly designed interior courtyard outside the prayer room. 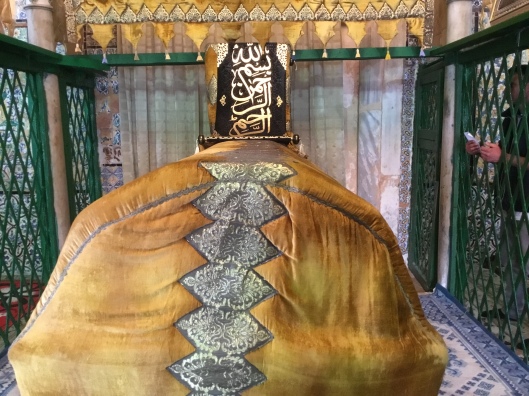 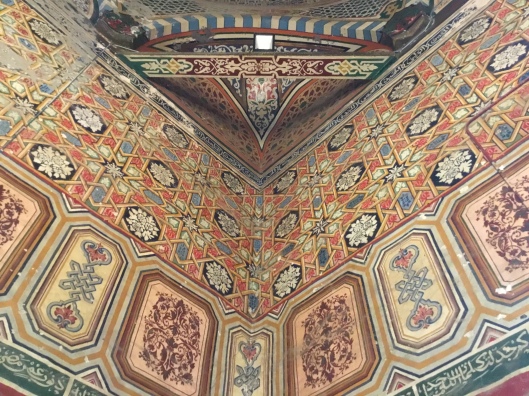 On my way back to the medina, I passed a packed restaurant with some delicious looking fish being served. I asked how much, and the price was 12 dinars. Granted, that is four times one of my hit or miss pita pockets, but it turned out to be a delicious experience. Refueled, it was time to try to find the hammam. My first attempt took me seperately past two of my previous attempted guides/carpet sellers, whose friendliness was perhaps dampened knowing I wasn’t going to purchase goods or services. Eventually I turned from finding the bathhouse in the medina to the one just opposite the gate of the martyrs. I passed it several times looking for what my guidebook told me was called Hammam Tak Tak but was labeled with an old sign saying “Bain Maure Sabra”.

Inside it was total party. Other hammams I have been to have ranged from fairly peaceful (in Turkey) to me being the only one there (I’m not sure where.) This had little kids, teens talking loudly, older guys hanging out and chatting – in the three rooms there was hardly a place to sit! I bet the fact that it was Saturday afternoon had something to do with it. I had to ask a bunch of questions – primarily where I could get one those buckets everyone was using. I couldn’t remember the name for bucket in French, so pointing sufficed. It’s also hard for me to navigate a new, culturally challenging and slippery environment without my glasses. It turned out to be quite rejuvenating, though, and I was glad I had followed advice from the Guide Routard and brought my bathing suit and my shampoo.

Dinner was at Restaurant Nakcha . This is an interesting place because it feels fancy (through an archway, in a garden, tablecloths, etc.) but I got a full meal (plus hours of comfortable free WiFi use) for 18 dinars. The view of the garden and (once again) the Barber’s mosque is an added treat. And despite the tourist signals, it was mostly local families. 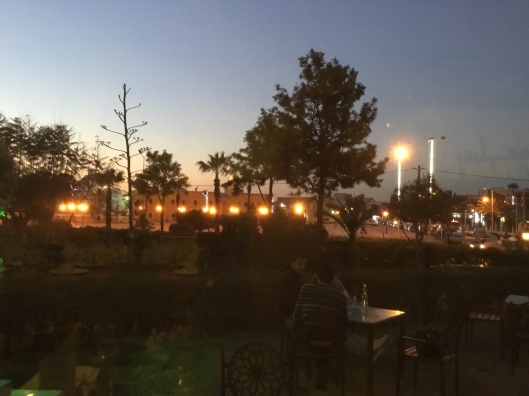