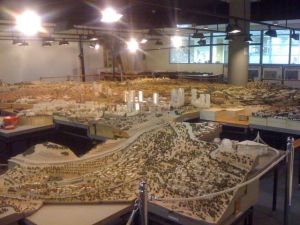 Incredible - the scale model of Jerusalem

Thank you so much to Sally Young for introducing Hilary and me to Ofer Manor, Chief Architect of the City of Jerusalem. Ofer was generous enough to meet with us for an hour. As someone who had been a Loeb Fellow at Harvard for a year, he knows what it is like to have the incredible privilege and also the challenge of living abroad for a year. He shared his insights into how best to make a home in Jerusalem as an expat, and he also allowed us a peak into his work life.

We were sitting at the Apple and Pear Café in Safra Square, and when I asked Ofer what is currently on his work agenda, he gestured to the light rail going by. “You are looking at it!” he said. He spoke about the difficulties of getting all the pieces in place – the traffic flow, the curbs and stones, the utilities. As a huge fan of public transport and of great urban design generally, I loved hearing his description of these decisions.

Since I had just the day before been sitting in a dilapidated courtyard in Silwan looking at a plan that showed many Palestinian houses razed for various park and archeological projects, I did ask Ofer about Silwan. He got a concerned look on his face and said regretfully, “Silwan is very political. Perhaps the most political area in all of Jerusalem.” He said he told people that he tries not to let politics get in the way of helping improve the day-to-day lives of people in the city. “I know people will say everything is political, but if you let the politics stop you, nothing will happen.”

To some extent I agree with Ofer – one does need to find opportunities and move forward where one can. I also have no real understanding of the scope and limits of Ofer’s authority. For example, the plan that has many houses demolished for the park for tourists in Silwan, but according to our presenter from Silwan does not have schools, hospitals or parking for Silwan’s residents – whose plan is that? It is “the municipality’s” – but who in this case is the municipality? Does Ofer have a voice in those decisions, and if so, what does he try to do?

Ofer not only took the time to meet with us, but went a step further and invited us to see the model of Jerusalem his office has put together. It is a marvel. A large room, representing only 15% of Jerusalem and yet showing a complex cityscape in remarkable detail. We could see the Old City, of course, and much of West Jerusalem, all the way from the Jerusalem Chords Bridge. We could have seen our house, but alas a column currently takes up the spot San Simon would occupy!