The two portraits Israel tends to give of religious attitudes are symbolized by Jerusalem and Tel Aviv. Jerusalem has its ultra-Orthodox, its overlapping and controversial holy sites, everyone trying to tell their story or to ignore other peoples’ stories. Tel Aviv has its all-night parties, its skimpy clothing and beach scene, its Bauhaus buildings historical only in the recent architectural sense.

This weekend I encountered several more religiosities when we took a family trip to the desert. Our hosts live in a beautiful moshav on the Jordanian border south fo the Dead Sea. Within two minutes of meeting them they spoke of loving the desert for its “power.” A few minutes later they asked us our astrological signs. If one had to assign these folks a role in the dichotomous “secular – religious” framework of Israeli discussions, they would be secular – no kippa on the man, tank top on the woman. And yet clearly they had their religious worldview.

The next day a handyman stopped by bearing the very un-Israeli name of Henry. He was introduced to me as a Mennonite, and it turns out that he has studied theology and philosophy and settled in the moshav with his Israeli wife. Henry is very committed to unschooling – he has many children and they learn by living in the rich environment he and his wife provide. Similar to some ultra-Orthodox and conservative Muslims I have spoken with this year, his family’s lack of a television stood as a symbol for him of his educational (and religious?) beliefs.

At the edge of a crater in the desert we encountered yet another faith that one does not see in Jerusalem. A group of mostly women in beautiful African dress were circled up in a ceremony. As we listened we heard English in clearly American accents. These were the African Hebrew Israelites, a group of African-Americans who believe themselves to be descendants of an ancient Israelite tribe and who have moved to Israel.

We also encountered more frequently seen religious traditions – the Jewish settlements around Palestinian Hebron, Palestinian villages with minarets rising up, caves of Christian monks from the 6th Century in the desert, the fortress of Masada overlooking the Dead Sea. But the Black Hebrew Israelites, the astrologers and the Mennonite were newer pieces of the religious puzzle of Israel and Palestine.

There are many websites giving the political and religious background to Hebron. Suffice it to say: about 500 Israeli settlers living in the middle of an old Palestinian city, near sites both Jews and Muslims believe are sacred.

First, I was somewhat surprised to encounter a real, live Palestinian city, which like Bethlehem or East Jerusalem, has an outskirts of tire shops, etc. along the entrance road, a new city, and an old city. In the new city cars jam the streets and the concrete four to eight story buildings hold shops selling cell phones, clothes and food. The police and soldiers one sees, like in Ramallah or Bethlehem, are Palestinian Authority.

My surprise came because I had read about how empty, divided and depressing Hebron was. I was interested to find that this description, and it is completely accurate, refers to a specific part of the city – the old city and several major streets near it. As I saw it today Hebron (or al-Khalil in Arabic) really exists in three forms: the new city described above, much of the old city, and a closed neighborhood that used to be a major market street. 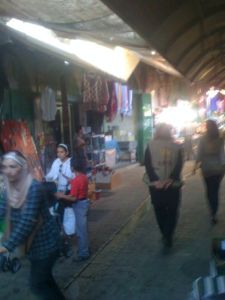 The old city lives a kind of half-life. I walked through most of the old city without crossing an Israeli checkpoint, though video cameras, guard towers and pairs of soldiers at street corners were common. The old city also now has earned the distinction of being the place I first encountered a genuine combat patrol – i.e. seven soldiers, spaced apart, on either side of the street, constantly sweeping their eyes in all directions. They were followed by two women with the World Council of Churches Ecumenical Accompaniment Programme in Palestine and Israel (international observers always wisely wear identifying clothing). 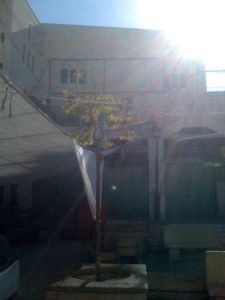 All Israeli soldiers I saw today in Hebron wore their helmets. For context, so far in a month of visiting the Old City of Jerusalem I cannot recall seeing an Israeli soldier wearing his helmet. Some shops were open, though the closer we got to the Ibrahimi Mosque more and more were closed. Some areas had metal gratings across the top of the street, because settlers living above, I was told, throw garbage down on the Palestinians in the street.

Near the mosque we went through a checkpoint like those along the security fence / wall – turnstiles with the guard out of sight, a green and red light to signal when you can go through, and then a metal detector. (You only see the soldiers after this procedure.) We then emerged out of the old city and into a ghost town. This is what I had read about. Some people still live there – we saw kids in windows, and the occasional Palestinian walking from one point to another. But these are large streets with three story buildings, major intersections and a large parking lot – all with no cars, every shop shuttered, and checkpoints at every entrance. I would guess it is about three blocks wide and very long, stretching up to another checkpoint.

As I was passing back through the checkpoint I saw perhaps the strangest sight I have yet come across in this region – a nicely, casually dressed observant Jewish family came walking around a corner. My neighborhood in West Jerusalem, of course, is full of families dressed this way. I was prepared to see angry settlers with guns, but this happy family walking down this post-apocalyptic wasteland of a street was absolutely bizarre.