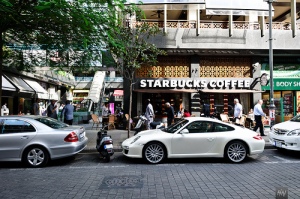 Spoiler alert. (That’s fun to say, since I hardly ever watch TV!)

I watched the first season of “Homeland,” and have now watched the first two episodes of the second season. As a spy thriller, I love it. But are we ever going to hear something positive about Islam? All good words are in the mouths of people who are either terrorists or being fooled by terrorists. Even the “saint” imam at the DC mosque would not tell the whole truth. The “good” Muslim CIA agent is a tiny character, and is a mix of Muslim and non-Muslim backgrounds. The preppy woman who grew up as an ARAMCO kid and loves a Saudi was a terrorist. On “Homeland” the American people have seen Muslim prayer close up multiple times, far more than almost any of them have ever seen it before. Each time these prayers have been offered by terrorists.

The opener of the second season was even more unhelpful to an American’s understanding of Islam. Brody’s daughter (in Quaker meeting at what is obviously Sidwell Friends) argues against anti-Arab prejudice, but is unknowingly defending a traitor. Brody’s wife says, “These are the people who tortured you” and throws the Qur’an on the ground. She’s terrified his Muslim faith means he’s still crazy – and, indeed, he is, and worse. Brody and his daughter bond over his burying of the desecrated Qur’an – once again, learning about Islam from a terrorist. We discover that both Abu Nazir and the Arab-American seductress reporter are from Palestinian refugee families – thus reinforcing the specific idea of Palestinians as the enemy, beyond their Arab and Muslim identities. Then the second episode, Hamra Street in Beirut is portrayed as a broken-down shooting gallery. Last spring, at least, it was a lovely shopping street where we stayed. (I highly recommend the 35 Rooms Hotel.)

I’ll be interested to watch “Hatufim,” the Israeli series on which “Homeland” is based, and see what of this comes from that show. 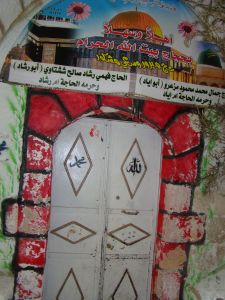 A hajji's door in the Old City

The Palestinian right wing looks like this: In 2008, a 26 year-old Palestinian man from Jabel Mukader in East Jerusalem killed eight students in their yeshiva. A poll found 84% of Palestinians supported the attack. As one walks around Ramallah, and even East Jerusalem, one sees posters of martyrs, including those who attacked Israeli civilians inside Israel. Posters at Abu Dis University as well in refugee camps proclaim, “Haifa, we are coming,” implying that refugees and their descendants should view 1948 Israel as their land. At Hamas anniversary celebrations in December, leader Ismail Hanina said, “We affirm that armed resistance is our strategic option and the only way to liberate our land, from the sea to the river.” This month Hamas has fired at least nine rockets from Gaza into Israel.

The Israeli right wing: A teacher at an Israeli national religious school I interviewed recently said that most teachers and students at her school would consider Arabs the enemy. The school would not even think of having meetings between their students and Palestinian students with Israeli citizenship. Recently a Jewish settler in Hebron, asked by visiting students what he thought the solution was to the hostilities in Hebron, answered, “to encourage the emigration of our enemies.” Last week Hebron settlers attacked a Palestinian woman’s home, burned Palestinian cars, and beat two Palestinian men. More broadly, in the last two years Israelis have killed 259 Palestinians; Palestinians have killed 19 Israelis.

I’ve often heard Israeli centrists and leftists say that the Israeli right is playing for the long term. Keep pushing – take a few more homes, intimidate a few more Palestinians, build a few more settlements – until there is a large Jewish majority in all of mandate Palestine, and the Palestinians who live there are a small and dwindling minority. I’ve also heard Palestinian centrists and leftists say that the real strategy of the Palestinian right is to hang on, to tough it out for the long term. The Israelis are just the latest in a series of imperial powers, they reason, and they too will eventually weaken and leave.

The right on each side seems to agree: the Israeli-Palestinian conflict is a zero sum game in which neither group can compromise and where each group is playing a long game for massive majority status and absolute governmental control in all of historic Palestine. This does not have to be the case, of course: beneficial co-existence has succeeded among many other hostile groups in the past, and real peace is the ultimate “value added” solution. But putting that to the side, there is one huge difference between the Israeli and the Palestinian right wings. The Israeli right has accurately predicted the future of a no-compromise policy, and the Palestinian right has badly misunderstood the character of Israeli presence in the land.

Israel holds almost all the cards: a gdp per capita ten times the size of the Palestinian territories, close to absolute backing by the world’s sole superpower, a highly effective army, a populace willing to continue with the status quo, and a sophisticated legal, political and administrative structure allowing them to move forward with oppressive policies without pushing the U.S. or their own population into outrage over injustices. Palestinians hold almost no cards. Palestinian violence only strengthens the Israeli right. Palestinians don’t have the money, the connections or, it seems, the sophistication to get their message out to the U.S. The surrounding Arab states have either made separate peaces (Egypt, Jordan), and/or are caught up in their own internal politics (Syria, Egypt, Lebanon). In any case, these countries have never been effective advocates of the Palestinian cause. Most obviously, the Palestinian territories are, well, occupied. Describing the situation as asymmetric is a deep understatement.

The vision of the Palestinian right will never come true; they need to reduce their goals sharply and unite with the Palestinian center and left and with the Israeli left. They need to forge a broad national consensus of absolute non-violence, giving up all arms, absolute rejection of a claim on 1948 Israel, and a policy of zero-tolerance for anti-Semitic talk. They need to throw themselves on the mercy of the international community on the issues of East Jerusalem and right of return or compensation for refugees. They need to make it clear that they will take whatever they can get, today. As a friend of mine said, “They need to be Israel in 1948. ‘You’re giving us swiss cheese? Great! We’ll dance in the streets!’”

The Palestinians have to make this sharp shift because the Israelis are not an imperial power. They have no homeland, no capital of London, Constantinople, Cairo or Damascus to which they will return. They are not here due to a combination of economic interest and colonial hubris. They feel this to be home more deeply than perhaps any other people on earth. To Palestinians, who look back a mere 160 years to when 96% of the population was Muslim or Christian and 4% was Jewish, the Israeli identification with the land seems unbelievable – but it is deeply, psychologically true. Waiting, in the best case for the Palestinians, will simply do nothing to lessen Israeli presence. We are, however, far from the best case for the Palestinians. Instead the Palestinians will be moved: one detour in the wall, one hilltop settlement, one secretly purchased Old City house, one demolished terrorist’s home at a time.

Both right-wings are, ethically, deeply in the wrong. For reasons of justice, human rights, concern for the other, and their own people’s humanity, both side should change their views and behaviors radically, in my opinion. But if these ethical arguments do not resonate, and one takes a narrow, identity-based, zero-sum view, only one party must change – the Palestinian right-wing. 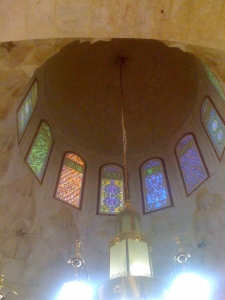 The Ibrahimi Mosque / Cave of the Patriarchs, in al-Khalil / Hebron

I’ve been reading about some of the Palestinian militants that have been released in exchange for Gilad Shalit. At least some are indeed terrorists, using the UN definition of “acts intended or calculated to provoke a state of terror in the general public, a group of persons or particular persons for political purposes.” Some aimed specifically at military targets, which most scholars would not classify as terrorism, but some went after cafés, buses, etc. One of the two women released, Amna Musa, is a powerful example: she convinced an Israeli teen to come with her and then had him shot. One man grabbed the wheel of a bus and drove it off the road – 16 people died. Another stabbed a 15 year-old girl to death. But Prime Minister Mahmoud Abbas says to those released, “We thank God for your return and your safety. You are freedom fighters and holy warriors for the sake of God and the homeland.” Anticipating the Palestinian celebrations of the prisoners’ return, the Israeli press had been full of opinion pieces that Prime Minister Benjamin Netanyahu echoed in his speech, “The State of Israel is different from its enemies: Here, we do not celebrate the release of murderers.  Here, we do not applaud those who took life.  On the contrary, we believe in the sanctity of life.  We sanctify life.  This is the ancient tradition of the Jewish People.” The Israeli ethical critique of the Palestinians is a strong one: terrorism, and praise for terrorism, is wrong.

At the same time, I have been reading about and indeed seeing the careful, patient, often quiet, sometimes less subtle Israelization of Palestinian homes and neighborhoods. It is happening across East Jerusalem, in Hebron, in Bethlehem, and even in the Old City. Palestinian houses are demolished and turned into parking lots, and then five years later those parking lots turn into Israeli settler housing. A barrier necessary for Israeli security is placed not between areas of greatest Israeli settlement and Palestinian settlement, but through the middle of Palestinian areas. Schools are underfunded in Palestinian neighborhoods. Approval of home repair is delayed. Identity cards are revoked. Streets and then whole neighborhoods are renamed from a Palestinian identity to a Jewish identity. Settlements are placed on hilltops near Palestinian villages. An entire modern bureaucratic apparatus is mobilized to push Palestinians out of their homes.  As Prime Minister Abbas said in his U.N. speech, “The Israeli government …continues… the systematic confiscation of the Palestinian lands and the construction of thousands of new settlement units in various areas of the West Bank, particularly in East Jerusalem, and accelerated construction of the annexation Wall that is eating up large tracts of our land, dividing it into separate and isolated islands and cantons, destroying family life and communities and the livelihoods of tens of thousands of families. The occupying Power also continues to refuse permits for our people to build in Occupied East Jerusalem, at the same time that it intensifies its decades-long campaign of demolition and confiscation of homes, displacing Palestinian owners and residents under a multi-pronged policy of ethnic cleansing aimed at pushing them away from their ancestral homeland.” The Palestinian critique of the Israelis is a strong one: driving people from their homes is wrong.

Assuming two sides in any conflict are morally equivalent is intellectually lazy, or possibly dishonest. In this case, the two sides are not mirror images. Each has a different challenge in striving for a more ethical society. Each does, however, have a significant change it needs to make.